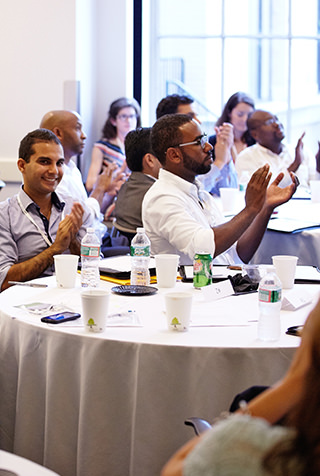 Meet the team behind the Legatum Center

Fiona Murray is the William Porter (1967) Distinguished Professor of Entrepreneurship, the Faculty Director at both the Martin Trust Center for MIT Entrepreneurship and the Legatum Center. Professor Murray is also the Associate Dean for Innovation, Co-Director of the Innovation Initiative, and has most recently been appointed a Member of the UK Prime Minister’s Council for Science and Technology (CST).

Dina is particularly interested in the role of the private sector in sustainable development. To that end, she has been an avid supporter of social entrepreneurship as a pathway to solving some of the MENA region’s most pressing challenges. She did this through her own social enterprise, Ahead of the Curve, which was founded in 2012. Dina is also a Senior Advisor to Ashoka, providing support to their Global Venture/Fellowship Support arm and helping them reimagine new ways to identify the world’s leading social innovators.

Dina formerly held the endowed Willard Brown Chair for International Business at the American University in Cairo (AUC), where was also Founding Director of the Center for Entrepreneurship. During the time she held the Brown Chair, Dina also taught classes on social entrepreneurship and business ethics making use of experiential and entrepreneurial teaching pedagogies.  Prior to the above, Dina helped establish the John D. Gerhart Center for Philanthropy and Civic Engagement at AUC.

Dina has been lead author of several publications including the book From Charity to Social Change: Trends in Arab Philanthropy and key reports such as the 2015 UNDP Business Solutions Report and the first of its kind 7 country study on trends in responsible business practice in the Arab region.

Megan Mitchell is the Director of Fellowship and Student Programs for the Legatum Center for Development and Entrepreneurship. Prior to joining MIT in January of 2017, Mitchell managed UBS Americas’ Elevating Entrepreneurs initiative, a portfolio of philanthropic partnerships and programs focused on driving toward a more inclusive entrepreneurial landscape. This included Project Entrepreneur, a collaboration with Rent the Runway Foundation to increase the pipeline of women building economically impactful companies. Prior to UBS, Mitchell oversaw co-curricular and experiential learning activities for Wharton Entrepreneurship, including the annual business plan competition and global internship program. She also served as a member of the Venture Initiation Program management team, and led development of the department’s venture development programs at the school’s San Francisco campus.
Mitchell holds a BA in Economics and Public Policy Studies from Duke University and a MSEd from University of Pennsylvania’s Graduate School of Education.

Artafern Afsar joined the Legatum Center in February 2018 as the Associate Director of Finance and Administration. Previously, he had worked at Rio Olympic Committee in Brazil, managing the operations budget for the various committee units. During his time in Rio, he became fluent in Portuguese and acquired a taste for Brazilian cuisine. As part of his contribution to the Olympic Committee, he volunteered in improving the quality of life in Rio favelas. He has over 16 years of experience in the field of budgeting and finance and enjoys the ever changing financial environment. He holds a BA in Finance, with a Minor in Computer Information Systems from Bentley University.

Julia Turnbull joined the Legatum Center as the Fellowship Program Associate in November 2014. She has experience evaluating the economic impact of infrastructure investments at the Inter-American Development Bank and growing investment portfolios that finance business in low-income markets for an international agriculture finance company. She has researched the outcomes of trade liberalization for political economies in Mexico’s urban neighborhoods and villages and taught financial literacy workshops for a savings and loan organization. Julia holds a B.A. in International Relations from Connecticut College and an M.A. in International Economics from the Fletcher School at Tufts University. She speaks Spanish.

Eileen has been a member of the Legatum Center team since October 2018. She manages our office space, tackles purchasing and accounting tasks, and provides logistical support for multiple projects, meetings, workshops and conferences.

A native Bostonian, Eileen has a B.A. in Romance Languages from Boston College, and an M.A. in Education from UMass Boston. She dabbles in language learning as a hobby, her latest interest being in Mandarin Chinese. With broad administrative experience in International Business and Higher Education—balanced by a multiyear stint in foreign language subtitling—Eileen is committed to supporting our mission and that of the larger MIT Sloan community. Staying near our campus shores, she sometimes sails the river Charles, musing upon science, art and song. Eileen is elated to be one of our crew.

Kavan O’Connor received a B.A. in English from the University of Hartford. After graduation, he moved to Boston and began his career in marketing, database management, and event planning. In 2006, he joined the United States Marine Corps Reserve where he was stationed at Fort Devens. He served in Iraq, helping to train the Iraqi army. Upon his return, Kavan worked for the Boston Athletic Association, supervising the Mile Marker Program of the Boston Marathon. Kavan comes to the Legatum Center from DMSE, a national event planning company specializing in expositions and athletic events.

William (whurley) is an Eisenhower Fellow, A Senior Member of the Institute of Electrical and Electronics Engineers (IEEE), Liaison for Strategic Partnerships for the Entrepreneurship Steering Committee at the IEEE, the first Ambassador to CERN and Society, founding partner of the CERN Entrepreneurship Student Programme (CESP), recipient of the IEEE Entrepreneur Achievement Award for Leadership in Entrepreneurial Spirit, and co-founder of EQUALS; The Global Partnership for Gender Equality in the Digital Age.

whurley currently serves as co-founder and General Partner at Ecliptic Capital, and founder and CEO of Strangeworks, a quantum computing startup in Austin, Texas. Prior to starting Strangeworks he was a Managing Director at Goldman Sachs [NYSE: GS]. He came to Goldman Sachs via the acquisition of his startup, Honest Dollar. Prior to Honest Dollar whurley founded Chaotic Moon Studios which was acquired by Accenture [NYSE: ACN].

Elizabeth MacBride is an award-winning business journalist and the founder of Times of Entrepreneurship, a new publication covering entrepreneurs beyond Silicon Valley. She is the host of the upcoming Sparkt, a new podcast featuring interviews of the world’s leading entrepreneurs. Her work has been funded by the Ewing Marion Kauffman Foundation. Her work has also been supported by the Aspen Institute’s Socrates Program, and she is a former fellow at Georgetown’s Beeck Center for Social Impact + Innovation. Elizabeth was a writing fellow at the UN’s Office of the Quartet in Jerusalem.

A former managing editor of Crain’s New York Business, her work has appeared in Atlantic.com, Forbes, Newsweek, The Washington Post, Quartz, HBR.com and many others. Her stories about entrepreneurs have been viewed by millions of people and translated into languages around the world including Arabic and Armenian.

Elizabeth has a journalism degree from the University of Maryland, where she was the editor in chief of The Diamondback, and an MFA in nonfiction from George Mason University. She is a single mother of two daughters.

Adel Boseli has more than fifteen years of experience in the field of entrepreneurship as an entrepreneur, consultant, mentor and a certified trainer. Through his professional career, and within his personal capacity, he is also a board member and angel investor in several startup companies in various industries including hardware, health, real estate, digital advertisement, e-commerce, manufacturing, logistics, energy, and others.
End of 2015, Boseli joined Qatar Business Incubation Center (QBIC) as Head of Incubation for more than 3 years. QBIC is one of the largest mixed-use business incubators in the MENA region. To date, it has incubated more 150+ startups, and its startups have generated more than $20M in revenues and have reshaped the entrepreneurial ecosystem in Qatar. Following that, he served as a consultant for Qatar Development Bank (QDB) in areas of entrepreneurship, innovation, and startups investment.
Boseli is also a founding partner in a number of startup support businesses; (2012) Shekra the first shariah compliant equity crowdfunding platform globally, (2014) Sustaincubator business incubator focusing on sustainable businesses (water, renewable energy, and agriculture), (2018) VFlock an investment network that focuses on preparing the right pipeline for Angel investors and getting startups ready for investment.
His businesses have been focusing on advancing the entrepreneurial ecosystem offering funding, training, research, consultancy, and incubation. With a primary focus on startups financing, and consulting for the World Bank Group on the subject, his businesses, specifically Shekra, have been recognized and awarded by Sheikh Mohamed bin Rashid Al Maktoum (Ruler of Dubai). Thomson Reuters, and Abu Dhabi Islamic Bank.
As a trainer, Boseli has trained 700+ startups across 7 different countries using different entrepreneurship methodologies and is a technical partner and lead trainer for many programs with vertical focus; social, tech, and sustainability.
Boseli started his entrepreneurial path in 2007, by joining IdealRatings – a San Francisco based startup; which has grown to be the global leader in Islamic fund management and index services.

He is also an Eisenhower Fellow. Which is a network that includes a distinguished number of global leaders that are successful and influential in various fields; private, public, governmental, political…etc. Upon completing the fellowship, Boseli was also named “Ward Wheelock Fellow for 2017” for demonstrating excellence; an honor received by one person a year among a group of hand-picked global leaders.
Boseli is a Computer Engineering graduate with 10+ years of experience in the software industry with a track record in software design, implementation, systems architecture, data analysis, and project management. He successfully delivered a series of successful software projects for clients that included local and global companies, regional organizations, and governments.
From 2006-2012 Boseli focused on community impact with a special focus on sustainable development. During this period, and through Rotaract and Rotary International organizations, he led the delivery of tens of projects in the areas of community service, human development, and illiteracy. In 2010, he held the post of Rotaract District Representative responsible for managing 10 countries and more than 1000 Rotaract members (youth aging 18-30).